Just before Christmas, a desperate little soul in need of help found his way to our shelter. As much as the team wanted to give him tender loving care, he was resistant at first and battled their attempts to handle him, but eventually they were able to calm him down and started getting him the care he so desperately needed.

When our veterinary team examined the kitty that would come to be known as Ebenezer, they found a likely source of his grumpiness- not only did he have a severe leg fracture, his bloody ear tips indicated probable skin cancer. His teeth were rotten – a symptom of advanced dental disease. Ebenezer was also underweight and skinny. Bloodwork revealed that the cause of his emaciation was hyperthyroidism.

While sitting in front of his kennel contemplating the best course of action for this ​poor old grump, Dr. Kather slowly caressed his head and he began to make muffins (kneading, for the unacquainted) on his blanket. In this moment, Dr. Kather could see that he wanted to keep going and fight for his life. Whenever we feel an animal does not want to give up then neither will we! 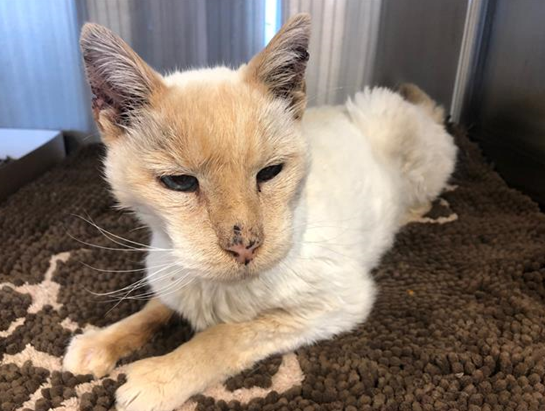 Ebenezer’s first major hurdle was getting through his multiple surgeries, but he passed with flying colors! His left leg had to be amputated, and the tips of both his ears were removed to excise the skin cancer. Most of his teeth needed to be extracted due to the level of decay. Despite going through numerous lifesaving procedures in a short span of time, he persisted and the next day the previoulsy testy kitty was in much better spirits! His next challenge is to cure his hyperthyroidism so he can start to put weight back on and become the healthy, happy cat we all know he can be. 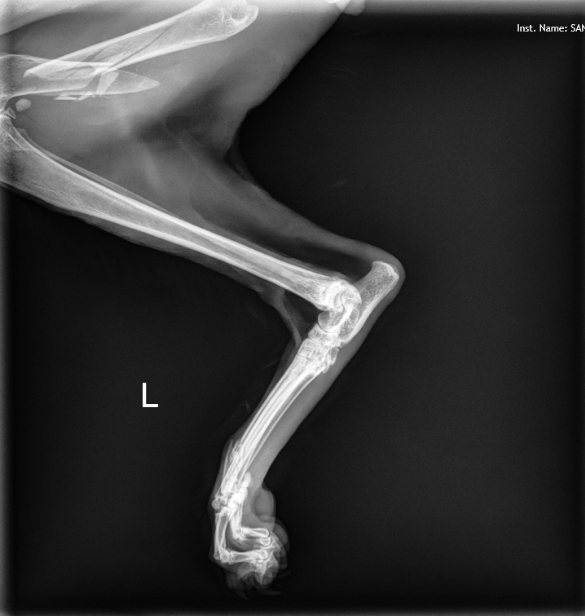 Our veterinary team previously took an isolated radiograph of his fractured leg, but to prepare Ebenezer for the radiation treatment, full-body x-rays had to be taken and provided to the specialist in advance of the treatment. Through the full-body x-rays, we discovered two projectiles imbedded in Ebenezer’s remaining legs. This poor kitty has suffered from not only diseases and leg fracture, but also serious leg injuries caused by the projectiles 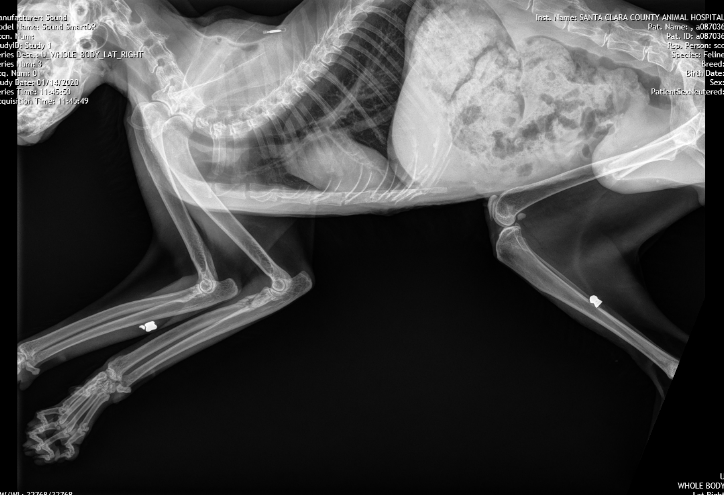 Our cat hero and volunteer, Pat Powell, stepped up and took Ebenezer to his specialist appointment in San Mateo so that he can get the radiation treatment needed to cure his hyperthyroidism. After having his broken leg amputated and his cancer excised, this should be Ebenezer's final stop on his road to recovery.

We can’t wait to see how Ebenezer blossoms in the coming months! Stay tuned for updates on his progress.

*UPDATE: After months of treatment and recovery,  Ebenezer is now a healthy and happy kitty and the search of a loving home for him is over. Ebenzer, now named Leonidas after the Greek warrior king, has found his perfect family!

Please consider donating to support our efforts in helping Ebenezer and other pets.​ ​