A Place for COMMUNITY

As the weather warms up and we all crave getting out into the sunshine, so do our reptile friends. Turtles, lizards and snakes crawl (or slither) about to bask in the sunlight which helps them to thermoregulate, digest food and absorb essential vitamins. If we respect the space of these critters, they a are content to keep their distance. Sometimes though, surprise encounters lead to unfortunate encounters.

Such was the case when an unsuspecting man in Morgan Hill was doing some yardwork on a sunny day early this month. After mowing the lawn, he was returning his lawnmower to his garage when he told his wife that he had been bitten by a snake. He told her that it was a rattlesnake. After his hand a face began to swell, he was rushed to the hospital and admitted to intensive care.

The man’s wife came home while her husband was hospitalized and spent a sleepless night worried about the venomous intruder possibly still lurking around her home and called for help from our Animal Control Officers the following morning. Officer Jessica Ibanez responded to the call and inspected the garage for the suspect snake. He wasn’t hard to find- perched atop a windowsill, catching up on his sun basking was a juvenile rattlesnake.  While our Officers do not destroy or abate healthy wildlife, officer Ibanez was able to humanely remove the snake and move him to an area outside the curtilage of the home. She provided the homeowner with two valuable things before leaving: this information from Fish and Wildlife about co-existing with rattlesnakes and preventing bites and, most rewardingly, peace of mind.

We were happy to hear that the bite victim returned home safely after recovering from the bite! If you live in a rattlesnake area, remember to exercise caution when entering areas that might serve as attractive hiding places for our scaly friends! 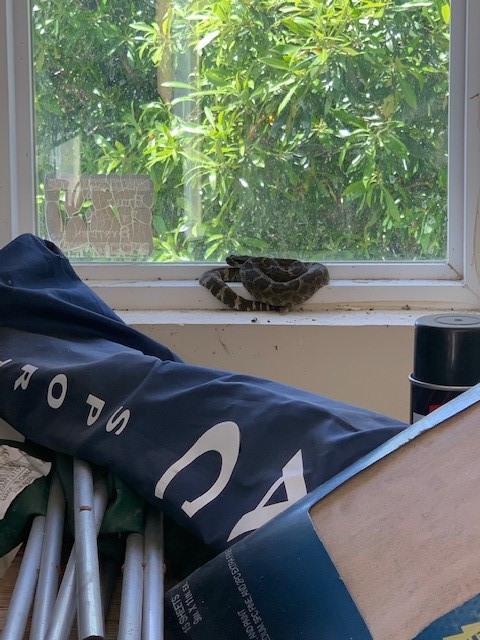